Had a great time playing in Mamma Mia with fantastic cast/crew/musicians. The season flew past really quickly and really enjoyed playing through all the tracks every night. I managed to get a couple of pictures with the band mates and also put together a quick video (link under pictures) of the first act of the show, giving you an idea of what I had to play: 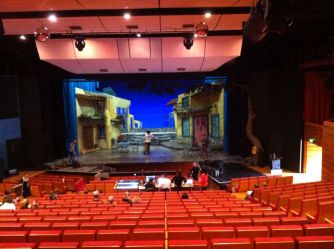 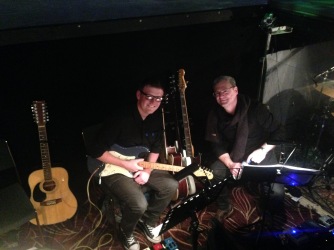 Mike Kirk and I on guitars

Mike, Me, Vallo and Beano

Mike, Me, Vallo and Beano having a bit of fun and striking a pose on stage

I have been a fan of many different session guitar players like Tim Pierce and Brent Mason over the years, but discovered another player this year called Ryan Haberfield. He plays for Jessie J in her live shows and he also does a lot session work. Anyway, I seen him upload a video clip on Instagram of him playing a solo for Doug Harper (session drummer). I thought it sounded great and decided to try use my ear and pick up as much as I could from the video to try learn it. It’s not something I would usually play as it does have a bit of ‘shredding’ in it, but I always like to try keep my chops up in all genres. Ryan saw the video I uploaded and commented on it saying “Cheers man! Great Job”.

Here it is, testing out the new Japanese strat. Hope you enjoy:

In other news, I have also been setting up a lovely 89 USA made Fender Strat for a friend. Almost there, just waiting on a new nut arriving that I ordered and it will be playing lovely! Here it is next to my 90 Japanese Strat:

I’m hopefully going to try upload smaller ‘news’ posts more often rather than just uploading large updates to catch up with everything after a long period of time.

Here is a little video I recorded a couple of months ago for some fun. It’s the solo from ‘Dancing in the Moonlight’ by Thin Lizzy. A simple little solo, but has a great groove to it:


I also recently played at the More FM radio station with Jazzi Axton, which was a lot of fun! We played a mashup of “Why Don’t You Love Me” and “Bust Your Windows” as part of the breakfast show. You can see the full performance below: